REDDING, Calif. – On Saturday, May 1, nearly 8,000 miles away from home, Nguyen Tran earned his B.A. in Mathematics during Simpson University’s spring commencement.

Tran, 21, of Ho Chi Minh, Vietnam, was among 186 graduates, including 124 from the traditional undergraduate program. His grade-point average, which was just shy of 4.0, made him eligible for two honors societies, Alpha Chi and Kappa Mu Epsilon.

“I feel really excited and accomplished,” said Tran. “I’m the first person in my family to study abroad and earn a college degree. My family is so proud of me, and it gives me confidence knowing that I was able to graduate in the States. I’m so thankful for this experience.”

Tran’s journey to Simpson began just over four years ago when his uncle, who was living in California at the time, told him about the university. After discussing it with his family, Tran enrolled at Simpson and made his first trip to the U.S.

“I was always interested in studying abroad, but I never thought I would actually have the opportunity,” he said.

Though he had taken some years of English in high school and studied for a year before moving, Tran said the biggest challenges were the cultural adjustments and communication with peers.

“People typically bond over things they share in common and similar past experiences,” he said. “I did a lot more listening than talking at first, and that taught me a lot. The people at Simpson made my transition very smooth.”

By his second semester at Simpson, Tran had made close friends and was a stand-out student. However, due to financial hardships, the cost of college became too difficult for Tran and his family to afford.

During finals week, as Tran was saying goodbye to fellow students, his English professor, Kim Huster, overheard him saying he was leaving. Kim and her husband, Michael, a Simpson physics professor, made Tran an offer he couldn’t refuse.

They invited him to stay in their home rent-free for the duration of his time at Simpson. 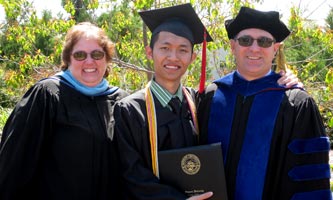 “It felt like a miracle that two people would do this for me,” he said. “When I asked them about rent they told me that it would rob them of the opportunity to serve if I gave them anything. Living with them has taught me about the passion to serve others, and they’re a great example. If you want to see God’s unconditional love, look at them.”

During his last semester at Simpson, Tran was accepted into Wake Forest University’s graduate program, where he will pursue his M.A. in Mathematics. He recently found out that he was selected for a teaching assistantship and will receive free tuition.

“We are very proud to see Nguyen graduate,” said Kim Huster. “Since English is not his native language, he has to work harder to maintain the high level of scholarship that he expects from himself. It has been a blessing to us to have him as part of our family over the past three years.”

Tran says he would like to find a job in the U.S. after graduate school.

“My years at Simpson have been a series of doors opened up by God,” he said. “My family and I have tried many times to carefully construct a plan for me, but God always came up with something better. God continues to surprise me with His plans for me.”