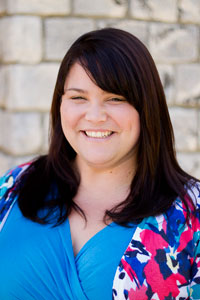 REDDING, Calif. – In 2003, during her freshman year of college, Kandice Stallcop attended Simpson University's annual health fair where she visited a booth of the National Marrow Donor Program's Be The Match Registry.

Not expecting to be a match, she had her cheeks swabbed for DNA so she could join the millions of other people in the database as a potential donor.

Eight years later, Stallcop was working at Simpson as the academic records specialist when her cell phone rang and the woman on the other end told her she was a potential match.

"It took me a moment to even remember that I was in the registry," Stallcop said. "So many years had passed; I had long forgotten about it."

Months later, after she had agreed to further, extensive testing, Stallcop learned that she was, in fact, a match for a man in his 30s who was battling leukemia.

"They told me the likelihood of matching a non-relative was slim," she said. "That's when it hit me -- I had the opportunity to give someone a new life. I felt like the sacrifice I'd have to make wasn't much if it could save a life."

During the hour-and-a-half procedure, where Stallcop was under anesthesia, a needle was inserted into her pelvic bone to extract two-liters of liquid marrow. After surgery, she had a blood transfusion to support her red blood cell count, which she prepared for before by donating three pints of her own blood over a two-week span prior to the procedure.

Despite some soreness, bruising and fatigue, Stallcop was back at work about a week later. The marrow replaces itself within four to six weeks.

The National Marrow Donor Program (NMDP) is a global leader in providing marrow and umbilical cord blood transplants to patients with leukemia, lymphoma and other diseases. Seventy percent of patients who need these transplants rely on the program and its Be the Match Registry to potentially save their lives because they do not have a donor match in their own families.

Weeks after the transplant of her bone marrow into the patient, Stallcop was informed that it was successful and the patient was recovering at home. The NMDP allows the patient to contact the donor after one year has passed if they choose. Until then, all information regarding donor and patient is kept confidential.

"In a year I can find out if he wants to meet me," Stallcop said. "I come up with these scenarios of how he may be doing and whether he has a family. I pray for him every day."

Stallcop said the process of being a donor was completely free to her. The NMDP covered all expenses, including the medical cost, transportation and meals.

In the midst of this selfless act, Stallcop said she realized that the process changed her.

"I think God gives us opportunities to have His character," she said. "I feel like he was teaching me to be generous -- it's a generosity with my whole being."

She said she hopes that her story will encourage others to join the Be The Match Registry so patients won't have to wait so long to be matched.

"When I was in pain after the procedure I would think about how he may be leukemia-free," she said. "In the greater scheme of things, what's a little bit of inconvenience and discomfort when I had the opportunity to save someone's life?"