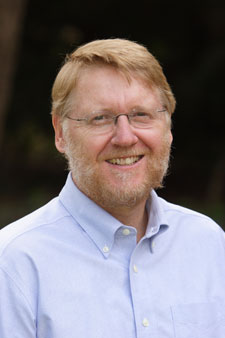 REDDING, Calif. – Paul Willis, current poet laureate of Santa Barbara and professor of English at Westmont College, will speak at Simpson University's annual Faculty Lectureship Series Sept. 29. The event, which is free and open to the public, will take place at 7 p.m. in the LaBaume-Rudat building in room 204 on the Redding campus.

Dr. Mardy Philippian Jr., chair for the Simpson Faculty Lectureship Series, describes the series as an opportunity to bring professors from other colleges and universities to present their research and creative work to Simpson University and the broader Redding community.

Willis has taught creative writing and English Renaissance literature at Westmont College since 1988. He grew up in Oregon, attended Wheaton College in Illinois, worked as a mountain guide in the Cascades and Sierra Nevada, and earned his graduate degrees at Washington State University, where he wrote a dissertation on The Forest in Shakespeare: Setting as Character.

Along with David Starkey of Santa Barbara City College, Willis edited the anthology In a Fine Frenzy: Poets Respond to Shakespeare (University of Iowa Press, 2005). His debut in creative non-fiction is Bright Shoots of Everlastingness: Essays on Faith and the American Wild (WordFarm, 2005), and his two full collections of poems are Visiting Home (Pecan Grove Press, 2008) and Rosing from the Dead (WordFarm, 2009). In 2010, WordFarm published his four-part eco-fantasy novel, The Alpine Tales, portions of which were previously published in 1993 by Avon Books.

Willis' poems and essays have appeared in over 100 journals that include Poetry, Image, and Wilderness, and have also been anthologized in The Best American Poetry 1996

(Scribner's), The Best Spiritual Writing 1999 (HarperSanFrancisco), The Best American Spiritual Writing 2004 (Houghton Mifflin), and The Best Christian Writing 2006 (Jossey-Bass). His poetry chapbook, The Deep and Secret Color of Ice, was selected by Jane Hirshfield in 2002 to receive the Small Press Poetry Prize. More recently his poems have been presented online at Verse Daily and on the radio by Garrison Keillor on "The Writer's Almanac." In April he was chosen to serve as the poet laureate for the city of Santa Barbara for 2011-2013.