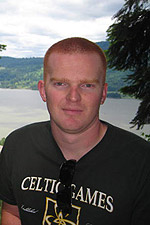 REDDING, Calif. - Weaverville resident Tom Bradford proves that no matter how busy life is, it is not impossible to finish your college degree.

On April 28, Bradford was among more than 250 graduates at Simpson University’s spring commencement ceremony, including 132 from the School of Traditional Undergraduate Education, 76 from the School of Adult Studies, and 41 graduate students.

Bradford enrolled in ASPIRE, Simpson University’s adult degree-completion program, 16 months ago after he transferred from Shasta College. The psychology major wanted a degree in a field related to his work, but most importantly, he needed a flexible schedule that would allow him to focus on life’s other priorities.

Over the last year and a half, Bradford commuted to Redding one night a week to attend classes.

“At times it was hard to balance everything, but I knew a degree would allow me to advance in my career and be assigned more responsibility,” he said. “During the challenging times, I’d remember that, and it would keep me going.”

For the last three years, Bradford has worked as an assistant probation officer for Trinity County. Under the direction of his supervisor, Chief Terry Lee, his responsibilities include providing services for juvenile courts, supervising cases, preparing court documents and appearing in court. Bradford said Lee supported his decision to finish his degree.

“My supervisor was fully supportive of me earning my bachelor’s degree,” said Bradford. “He saw potential in me and encouraged me to go for it. He gave me a lot of motivation.”

Since 2008, Bradford has been active in the U.S. Army Reserves, which requires travel and training one weekend a month through the end of his contract in 2014. In July 2011, Bradford was appointed by his platoon to compete in The Best Warrior competition, where he won first place and went on to compete in Utah. After winning that competition, he competed again in Missouri. Though he placed second, he will be competing in Kentucky in May after the first-place winner became unable to compete. The competition includes physical and mental tests as well as a written exam.

“It was an exciting year, and I had a lot going on,” he said. “But I had this drive to keep going because I knew people were counting on me."

Bradford said what was most helpful to him was receiving support from his supervisor, family and Simpson staff. “Life can be busy, but there’s always an hour a day that you can dedicate to schoolwork. Even though it was challenging, it was well worth it,” he said.