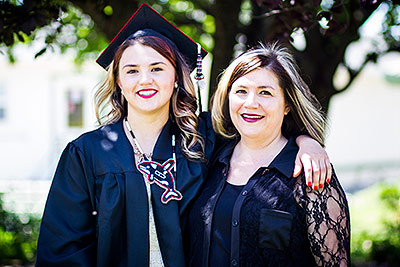 REDDING, Calif.—When she graduated from college on April 27, 22-year-old Tempest Dawson had a lot of eyes on her. The oldest of 10 siblings, she’s got quite a standard to uphold.

“A big motivation for me to finish school was my brothers and sisters,” she said. “Anything I do, they want to do, so I try to be a good influence on them.”

It’s a role the Simpson University biology major has taken to heart. She transferred to Simpson three years ago from junior college in Stockton, recruited by a basketball coach on a scouting trip.

“It felt like an inviting place,” she said. “I thought it would be the best fit.”

Tempest grew up in Chiloquin, Ore., on the Klamath Indian tribe’s reservation. A direct descendant of the Klamath tribe, she’s also enrolled in the Tulalip tribe. Her American Indian family and surroundings helped shape her character and her passion for service.

“I feel like I came from a community where a lot of people don’t know about the importance of college,” she said. “My mom was the first-generation college student in her family, and that had a big influence on me.”

As a girl, Tempest would sometimes go to college with her mother, who is pursuing her doctorate in psychology. Having that kind of role model fueled Tempest’s own aspirations.

“I’ve wanted to be a doctor ever since I was really young,” she said. She chose to major in biology at Simpson to help meet the requirements for medical school. Her psychology minor also reflects her mother’s impact—and rounds out Tempest’s holistic approach to medicine.

Larry Siemens, assistant professor of chemistry, said Tempest’s strength and personality stand out. “She is a unique student,” he said. “She has a quick mind, giving her the ability to accomplish amazing things.”

In addition to playing basketball, Tempest also was vice president of the campus Biology Club for two years and a member for three. In spring 2011, she traveled to Guatemala on a medical missions trip, helping with patient intake at a nonprofit clinic.

“That was probably my most life-changing experience at Simpson,” she said. “It strengthened my relationship with God. Being able to spend time with people in poverty and helping build relationships let me know that God is good and that I should be thankful for what I have.”

Tempest found Simpson’s biology program very challenging, especially in the beginning. “At first I wondered how to do it, it was so intensive,” she said. “It was hard to balance with basketball because it takes so much time and energy to complete the courses.”

But as time went on, she began to appreciate the rigor. A biology major takes courses that include microbiology, biochemistry, physics, chemistry, genetics, immunology—almost all of which require hours in the lab each week.

“Now I realize it was a great program in that it helped prepare me for the next level,” she said. “I’m studying for the MCAT (Medical College Admission Test), and I see that all the stuff I learned was beneficial.”

She smiled. “They weren’t just giving us all that hard work to torture us.”

The university has about 40 biology majors, two of whom graduated this spring. Tempest found the small class sizes—sometimes three to seven students—to be helpful.

“When I had a question I could go right to the professor—and you could ask a lot of questions,” she said. “That improved my knowledge about the subject. At a big university, I couldn’t do that.”

Simpson’s service mindset also enhanced Tempest’s academic experience. She volunteered at Mercy Medical Center in Redding as part of the ministry practicum all Simpson students participate in for two semesters.

“It helped validate that I really want to be a doctor,” she said.

Tempest’s dream is to be a family practitioner in a rural Indian area. “I want to give back to my community,” she said. She notes that her ethnic background and cultural understanding could eliminate some barriers in providing care to patients who might not be as comfortable elsewhere.

Her practical, giving spirit is already known in her community. For the past two summers, she and her mother have organized a grant-funded youth basketball program for the American Indian children around the Klamath reservation area. Tempest leads the camps, often hiring other college ball players to help out.

She also worked in the Klamath Tribal Wellness Center, securing her EMT license in the process. During part of her time at Simpson, she went home one weekend a month to volunteer on the Chiloquin ambulance.

Her drive and work ethic also helped her secure funding for college. Tempest researched medical school requirements and began applying for scholarships to help her achieve that goal.

She received athletic and academic scholarships from Simpson her first and second years and only had to take out minimal loans. For her third year she was awarded the Indian Health Services scholarship, which pays for tuition and offers a monthly stipend. “It’s very competitive,” she said. “I didn’t get it the first time I applied.”

Prior to her final year at Simpson, she applied for an MCAT preparation program through the University of North Dakota and was awarded a scholarship to study for the MCAT. She also earned a scholarship for a 14-day EMT boot camp.

She encourages other students to do the work required to apply for scholarships. “There are a ton of scholarships out there,” she said. “I might’ve spent 20 hours researching and writing essays, but it ends up paying more than a minimum wage job would.”

The biology professors at Simpson said they were impressed by Tempest’s behind-the-scenes work to pursue her education.

“Tempest is one of the most enjoyable students I’ve ever had the honor of teaching,” said Brian Hooker, assistant professor of biology. “Her boldness and tenacity made her a ‘world-changer’ even before she left Simpson University. She’s never heard the word ‘impossible.’”