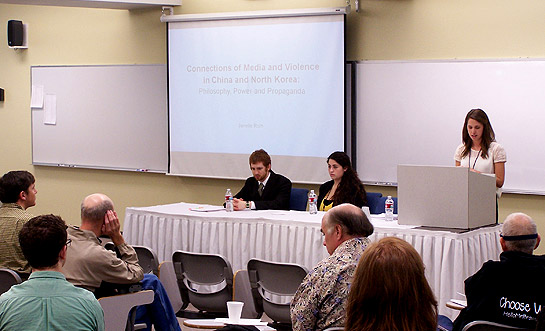 Roth, who will graduate in April with a bachelor’s degree in communication, was asked about Rodman’s celebrity visit during Simpson’s third annual symposium on March 2, following her talk on “Connections of Media and Violence in China and North Korea: Philosophy, Power and Propaganda.”

"He is an interesting representation of our culture," she said. "I am more interested to see what comes about of it, if anything. But what I can say is that if there is any time in history that I would like to be in Dennis Rodman's shoes, it would hands down be during his time with the leaders of North Korea."

Roth was one of 33 students who presented talks or posters about research projects—and answered audience questions—during the free, daylong event. Visitors, who received a complimentary lunch in the campus dining center, could choose among multiple 10- to 30-minute presentations on a variety of topics.

The symposium emulates a professional academic research symposium, where scholars present their work in a formal setting. It gives Simpson students an opportunity to showcase their learning, and, in some cases, original research.

“The idea is for us to be doing our own real research and include students as research assistants,” Norman said. “It gives them a set of skills that hopefully will put them in a better position to get into graduate school.”

Dani Perez, a psychology major from the Bay Area who transferred to Simpson last year, was part of the team that presented at the symposium.

“It’s a privilege to demonstrate to the public the things happening here,” she said. “It says much about our exploration as emerging adults.”

Roth said she chose her topic of media and violence after studying in China during the spring 2012 semester. Already aware of the government’s attempts to censor news and social media outlets to its citizens, she said she got a firsthand taste of it when the Chinese government hacked into her computer.

"After having my computer hacked and numerous files deleted, as well as third-party members listening in on Skype conversations, I began to think about all of the freedoms that I was granted in America, that I did not have while studying in China,” Roth said. “This spurred me to research more about the topic, once I was home and able to search such topics as media censorship that I could not search while I was in China."

Other symposium presentations included such topics as “The Romanticization of Pocahontas: Discovering the Truth Behind the Legend,” “The Value of the Arts in Peacebuilding,” and “Three in the Bed: Co-Sleeping and its Effect on the Marriage and Family.” Two students presented the results of chemistry studies done on the campus pond.

Red Bluff resident Roger Cox, a physician who ran for Tehama County supervisor in June, attended the symposium to see his nephew, Stephen Lennstrom, who addressed audiences in morning and afternoon sessions on the topics of church and state relations and the psychology group research.

“I was really impressed that they’re doing this,” Cox said. “I think it’s important because it gives the students a chance to get feedback from the community about the relevance, strengths and weaknesses of their work.”

Learn more about the Student Research Symposium and read summaries of the presentations at simpsonu.edu/researchsymposium.