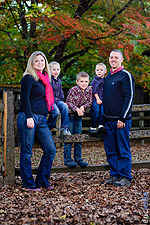 REDDING, Calif. - Red Bluff residents Melinda and Robert Richardson went on unique dates during the past 16 months. Instead of going to dinner or a movie, they commuted to Redding most Thursday nights to attend class through Simpson University’s ASPIRE degree-completion program.

On April 27, they will both graduate with bachelor of arts degrees in liberal studies. They will be among 214 Simpson University students—including more than 50 in the ASPIRE program—who will walk across the stage during an outdoor spring commencement ceremony.

“We decided on Simpson’s ASPIRE program because we both wanted to be in school,” Melinda said. “The class time requirement and format allowed me to be there for my kids.”

The biggest challenge the Richardsons faced in continuing their education was time management. While they were in school, Robert worked full-time at the Walmart distribution center in Red Bluff, and Melinda stayed home with their three sons: Robert, 8, David, 6, and Elijah, 4. She also helped with language arts and math groups at her sons’ school and took care of her aunt with special needs.

“We had to balance going to school together, being ready for the babysitter, getting work done at home and doing school work,” Robert said.

Robert began his college education in 2008 after being honorably discharged from the Air Force in 2007. While attending Shasta College and Chico State, he realized he was looking for a different type of school setting. When he started the ASPIRE program, he knew he had found the right fit.

“The whole experience doesn’t have a young college feel,” he said. “It is an older crowd focused on school. The teachers cared and were more available than others I’ve had. They were so knowledgeable.”

Melinda started her college education after graduating from high school in 1999. She attended  Shasta College, San Jose State and Chico State before taking a break from school when she got pregnant with her oldest son.

She recognized the need to finish her degree when she could not make more than $10 an hour while transitioning back to life in the States after Robert was discharged from the military. The family had been living in England. “Even though I had completed four-and-a-half years of schooling, it meant nothing without a degree,” she said.

“I always wanted to teach,” Robert said. “I want to do something for others like I did in the military. I want to help someone else have a better life.”

“I want give back and help out my community,” Melinda said.