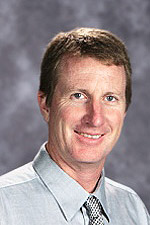 REDDING, Calif. - Scott Smith, a ’95 Simpson University graduate and principal of Vista Verde Middle School in Greenfield, was recently named Middle Grades Principal of the Year by the Association of California School Administrators for region 10.

In Smith’s first year as middle-school principal, the school experienced a dramatic improvement in test scores: a 57-point gain on the Academic Performance Index, the fourteenth highest jump among California middle schools.

Smith double-majored at Simpson in history and social science. He began his teaching career as a substitute teacher in the Greenfield Union School District, then taught middle-school for five years before moving into school administration.

He credits a strong team of students, parents, teachers, staff, and district personnel with the school’s success. “Without the team cooperating together to benefit students, I would never have received the award,” he said.

Smith’s Simpson roots run deep. His parents, James and Janet Smith, and his in-laws, James and Arline Friesen, attended Simpson together when it was located in San Francisco. Scott Smith met his future wife, April, when the young families would visit each other.

While at Simpson, Smith helped paint and carpet the dining center, and served as student body vice president and volleyball team captain. After graduating, he moved to Orcas Island, Wash., where he worked as a construction foreman. During this time he became reacquainted with and later married April, who had graduated from Fresno State with a business and information systems degree.

Smith has supported multiple students from the Central Coast who have attended Simpson and said he believes that what students learn there will help them make a difference in people’s lives.

“Serving those around us is central to the work many Simpson graduates do every day,” he said.

Smith notes that he did not set out to have a career in education. “All I do is what God puts before me,” he said. “I have taken the opportunities that come up and made sure I treat every student and adult with respect. God has blessed my efforts.”