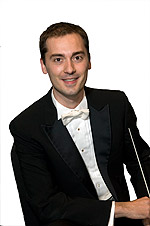 REDDING, Calif. - Simpson University music professor Dwayne Corbin will serve as resident conductor of the North State Symphony while the organization transitions to a new director, the symphony board announced this month.

“As the symphony board looks towards a new music director taking the helm in the fall of 2015, they recognized that there would be events that would require a conductor who is not a candidate for the position,” states an article in the symphony’s March e-newsletter. “The NSS Board has appointed Dwayne Corbin its ‘resident conductor’ in order to fill these voids and give continuity to the orchestra during this time of transition.”

As resident conductor, Dr. Corbin will lead secondary-level concerts and be on call to fill in for rehearsals as needed, among other tasks. He has already been unofficially functioning in this role during the 2013-’14 season, including planning and conducting the symphony’s holiday concerts.

“The December concerts were a thrill: it’s a real pleasure to work with Northern California’s finest musicians,” Dr. Corbin said. “I have great respect for my colleagues and am honored to lead them in rehearsals or concerts.”

Dr. Corbin, who holds a doctoral degree in conducting from the University of Cincinnati Conservatory of Music, will retain his position of principal percussionist with the symphony, a role he has held since 2006.

An award-winning composer and associate professor of instrumental music at Simpson University, he is also conductor/music director of the Shasta Symphony Orchestra (a cooperative ensemble between Simpson University and Shasta Community College), and a regular presenter of jazz and classical recitals.

During the North State Symphony’s search process, conductors who have applied for the music director position being vacated by Kyle Wiley Pickett will lead the orchestra concerts.

“The 2014-15 season will be a thrilling time when the audience will see a different conductor for every concert,” Dr. Corbin said. “I’m looking forward to being a part of the team that will bring these shows to life.”


The North State Symphony was created in 2001 from the merger of the Redding and Chico symphonies and functions as a program within Chico State University. Learn more at northstatesymphony.org.