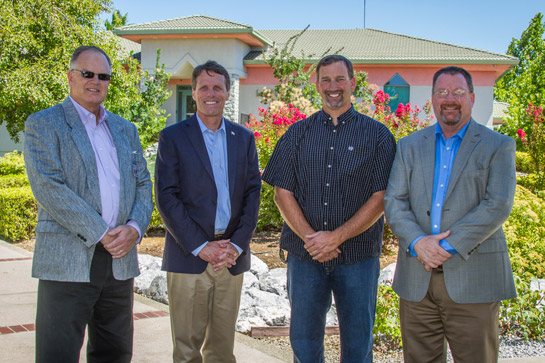 "I was pleased to tour the new Science and Nursing Center, which offers a major opportunity for North State residents," Sen. Gaines said. "The medical profession is a growth industry, and Simpson is playing a key role in linking students to jobs that are fulfilling and well-paying."

In addition to touring the 30,000-square-foot facility, discussions were held about the importance of the Cal Grant student financial aid program and issues facing Simpson University and higher education.

Dr. Dummer shared about the university and its varied student populations, the decision to build a new state-of-the-art facility, and ongoing efforts to meet the educational needs of the North State.

"Even as a private university, Simpson University serves a large number of low- income and first-generation college students,” he said. “We are proud to be able to provide a higher education for these students, opening doors of opportunity to them that they would not otherwise have.”

Simpson University, established in 1921, is celebrating its 25th year in Redding, Calif. In fall 2014, the university will dedicate a new Science & Nursing Building. Simpson is a Christian university offering undergraduate, graduate, and teaching credential programs. Academic programs include ASPIRE, a degree-completion program geared toward working adults. Simpson is expanding its online course offerings, including degrees in psychology and organizational leadership. For information about the university, or to arrange a campus visit, call 1-888-9-SIMPSON or visit simpsonu.edu.