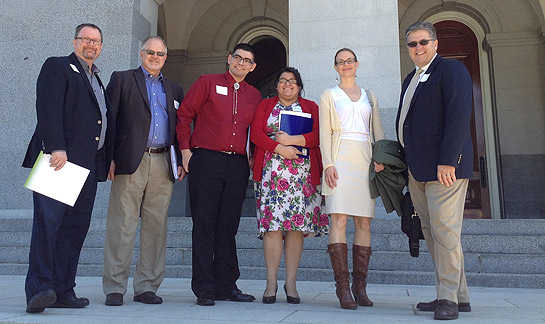 SACRAMENTO, Calif. - Simpson University students and administrators recently spoke to state officials about the importance of Cal Grant funding during the Association of Independent California Colleges and Universities (AICCU)’s annual Day in the Capitol.

For the past three years, Cal Grant funding for students attending private, non-profit colleges and universities has been targeted for potential cuts by the state legislature. Nearly half of Simpson’s traditional undergraduate California students receive Cal Grants.

“We were pleased with the reception we received from our California Assembly members and senators," Dr. Dummer said. “The Cal Grant is critical for student access to higher education at all institutions in California. This is particularly true for AICCU schools like Simpson University that do not receive state subsidies.”

Elizabeth Haase is a senior from Red Bluff majoring in cross-cultural studies with a political science minor.

Zachary Sanchez, a sophomore from Azusa, Calif., is working on a double major in history and Spanish, along with a pre-law concentration.