REDDING, Calif. - A group of Simpson University Outdoor Leadership students hiked, kayaked, climbed and snowshoed more than 175 miles during fall semester, enduring freezing winds, blisters, heavy packs, and the challenge of surviving in the backcountry for up to two weeks at a time.

In the aptly named Immersion Semester, they also witnessed stunning mountain vistas, sunrises, sunsets, and “otherworldly” moonlit granite. They smelled desert sage after rain and crunched through fresh snowfall. They navigated river rapids and rappelled down a cliff face. 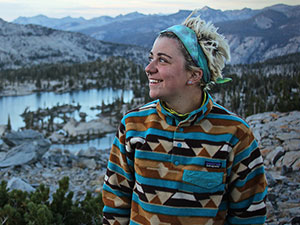 “I learned so much about community and how to intentionally love people well,” said Kirsten Raridon, a senior. “I’ll be able to carry that out through the rest of my life.”

It was a theme echoed multiple times during an Immersion Semester and Outdoor Leadership celebration held on campus earlier this month.

Simpson University is the only West Coast college in the Council for Christian Colleges and Universities to offer an Outdoor Leadership major and minor. In its ninth year, the program has graduated men and women who are working as leaders at adventure companies, universities, camps, recreation centers, and more.

Participants Raridon, Nick Salgado, Moriah Stock, Caleb Heatherly, and Matthew Tsarnas said the semester tested them physically, mentally, emotionally and spiritually. The course culminated in a student-led expedition at Crater Lake National Park, which they were forced to cut short due to blizzard-like conditions.

“That was a hard call to make but one of the most valuable experiences I think we had – deciding to call off the trip because of the needs of the group,” Salgado said.

They opted instead to explore Whiskeytown National Recreation Area, just west of Redding. “It was nice to realize we had a place like this so close to college,” Heatherly said.

Outdoor Leadership assistant professor Amy Smallwood traveled with the group, and other instructors joined for specific skill training. Simpson alum Wendy Ewing ‘13, who earned a minor in Outdoor Leadership, was a co-instructor during a two-week trip in Yosemite’s backcountry (she blogged about the trip for Trek Tech). 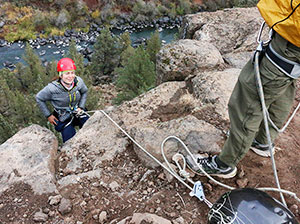 Group members read C.S. Lewis’ “Till We Have Faces” as part of their study, spent time in individual solitude, and practiced teaching and leading each other.

“It was a really good growing experience, especially for my faith,” Stock said. “We came to know ourselves and each other better as we journeyed through God’s creation.”

The students expressed appreciation for professor Smallwood, who chairs the Leadership Studies Department.

“It was a wonderful privilege to be with her … being taught to live life well, not just in an academic sense, but also in a moral, personal way,” Raridon said.

As part of the Immersion Semester, the students served more than 65 hours as volunteers at an Association for Experiential Education Conference in Portland, Ore. They also earned certifications as Wilderness First Responders, as did five other people who joined that class from as far away as Bend, Ore., and the San Francisco Bay Area. 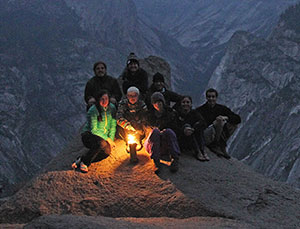 Smallwood said she watched the students’ confidence grow along with their outdoor skills. “They carry themselves with more purpose. They look for ways to serve instead of looking for ways to be served. They feel inspired to take on leadership roles. And they have grown to look upon challenge as a path to growth rather than an uncomfortable annoyance,” she said.

“My hope and prayer for each of these students is that, through the experience of this Immersion semester, they have encountered the profound love of Christ. The hope of the world rests in this love,” Smallwood said.

Learn more about the Outdoor Leadership program, which also offers a stand-alone Certificate in Wilderness Leadership.