REDDING, Calif. - The 14th president of Simpson University was inaugurated Oct. 16 in a ceremony marked by exhortations, prayer, remembrances, and challenges for the future.

Dr. Robin Keith Dummer, 61, who graduated from then-Simpson College in 1976 and has served for more than two decades as a Simpson professor and administrator, shared a forward-looking vision for the university while reinforcing its commitment to remain a “Gateway to World Service.”

“I firmly believe that the challenges are exceeded by the opportunities God has placed before us,” he said.

Dr. Stanley Clark, who served as Simpson’s provost from 2005 to 2012, gave the address, titled “The University Mission and the Kingdom of God.”

Dr. Betty Dean, chair of the board of trustees, offered a charge; and Dr. James Grant, who served as president from 1993 to 2006 and is now chancellor, offered a challenge.

President Dummer acknowledged the work of the four presidents and others who led the college during his time as a student, professor and associate provost. He noted a common theme throughout Simpson’s 94-year history: “There were difficult times that required faith and determination, and God provided.”

He gave an overview of the college’s history: Simpson Bible Institute was founded on 3 acres in Seattle in 1921 and averaged 94 students in its 34 years there. It became a regional school and moved to a 5-acre campus in San Francisco in 1955, where it averaged 277 students over the next 34 years and offered courses at 17 extension sites. Simpson College moved to Redding in 1989, to an 85-plus-acre campus, where in 26 years, it has averaged 1,050 students each fall. It became Simpson University in 2004 and has offered courses in Korea and other California locations.

“One commitment that has always remained is that we are a ‘Gateway to World Service,’ where we indeed remain mission firm,” President Dummer said. “Meanwhile our expressions of avenues of service have broadened.”

Simpson University’s responsibilities are twofold, he said. “First, to see that we deliver the best education we can … to prepare our students for … meaningful work and service.” He commended the “great things” taking place in areas of program growth and expansion under the direction of Provost Gayle Copeland, including the additions of programs in political science and biotechnology next fall.

A second responsibility is “to expand our commitment to serve the increasingly diverse educational needs of our local and regional community.” He pledged to work with business and community leaders to better identify and meet these needs. “We have some work to do,” he said. “How can we be a greater part of the solution?”

President Dummer concluded his address by talking about “who we are,” “what we do,” and “why we serve.”

“Motivated by the love of Christ, we pour ourselves into the lives of students who in turn pay it forward by serving others,” he said. “What results is a legacy that is eternal. There can be no higher calling than that.” 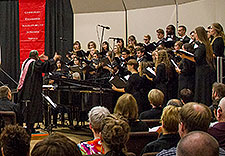 Dr. Francis Grubbs, who served as president from 1987-1992, led a prayer of dedication after board members Ray Reid and Norman Reinhardt presented President Dummer with a medallion.

The Simpson University Chorale, under the direction of Dr. Cyril Myers and accompanied by Lois Nichols, sang “God of Grace and God of Glory” and “How Great Thou Art.”

An outdoor reception followed the ceremony.

View a recording of the inauguration ceremony and a slideshow of photos at simpsonu.edu/inauguration.

Listen to the Simpson University Chorale's inauguration performance of "How Great Thou Art."