REDDING, Calif. - A translation of a novel by a Simpson University professor has hit No. 1 on the bestseller list in the fiction genre in Japan, and a foreign movie based on the novel will premiere overseas on June 20.

“The Pearls of the Stone Man,” by Edward Mooney Jr., tells the story of an older couple helping teens in trouble. First published in English in 2002, it was translated into Japanese in 2004, and the film rights were purchased in 2011.

Dr. Mooney, who teaches education at Simpson University, said it has been quite an experience watching his novel take on a life its own in another country and culture.

"The journey from writing the book to seeing a movie come from it has been amazing,” he said. “It has taught me the value of perseverance and passion through difficulties, trials and problems."

Dr. Mooney started writing the novel in 1995 when he lived in Pine Mountain, Calif., and worked as a technology director at a high school. His work there and at a local teen center brought him into contact with elders and teens, both of whom “hated each other,” he said.

When he learned that some senior citizens needed help clearing rocks from their driveway, he connected them with some teens needing work. The partnership proved successful, and the idea for the novel was born.

In 2003, some Japanese businessmen saw “The Pearls of the Stone Man” at a bookseller’s convention and got copies from the publisher.

“They said, ‘In Japan, pearls are very important to our culture, and we have an ancient legend called the Stone Man,’” Mooney said. A few months later, they bought the translation rights, and the Japanese version of the novel came out. 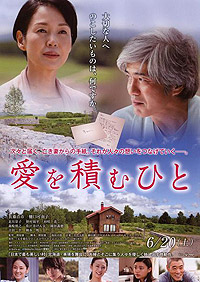 Seven years later, a Japanese movie producer bought the rights to make a film adaptation, first in Japan, then in America.

Dr. Mooney, who has never been to Japan and does not speak Japanese, was consulted regularly during the film adaptation process, often via Skype.

“The respect has been immense,” he said. “They would ask me, how do you feel about this, Edward-san?”

The screenwriters were careful to consult with him on small details, he said. For instance, they asked his permission to change a meal scene that featured a meatball sandwich to one featuring miso soup.

They also included things in the film to honor Dr. Mooney and his wife, Carrie, upon whom the main characters are loosely based.

“It is difficult to put into words how wonderful it is to see the very characters you have felt intimate with through these 20 years come to life on the silver screen,” he said. “All great projects, ones we believe in deep inside, are worth working through the many obstacles we come across. It's a dream come true."

Dr. Mooney is also listed on the International Movie Database (IMDb) with a writing credit for "The Pearls of the Stone Man."

Dr. Mooney was born in Massachusetts and raised in California. He holds a bachelor of science from Montana State University, master of arts from the University of California, Riverside, and a doctor of education from Northeastern University in Boston.

Prior to coming to Simpson University in 2014, Dr. Mooney taught high school science and social studies. At Simpson, he is an assistant professor of education.