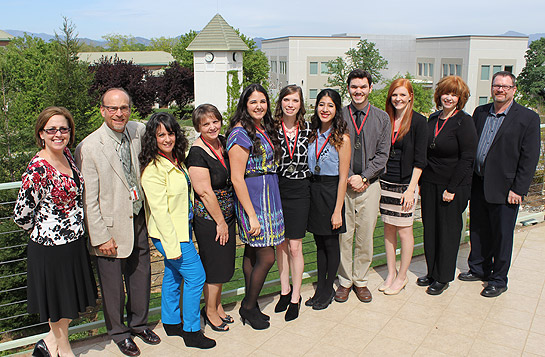 The class of 2015 honorees include seven students from the four-year Bachelor of Science in Nursing (BSN) program and four registered nurses (RNs) in the 16-month RN-BSN Track. The students comprise the top third of their graduating class.

They were recognized during a luncheon March 20 that included School of Nursing administrators, faculty and staff, society board members, and alumni from the program, including four members of the class of 2014 employed as nurses in Redding.

“They have shown leadership, excellence and service throughout their time at Simpson University,” said Paul Herman, assistant professor of nursing and master of ceremonies. “My colleagues and I are proud to have had a small part in preparing and educating these graduates.”

Dr. Robin Dummer, interim president, offered congratulations and acknowledged that nursing is a profession “that doesn’t stand still.” With that in mind, he said, “part of excellence is also maintaining life balance as you serve others.”

Laura Kobzeff, a ’13 nursing graduate and president of the honor society’s board of directors, delivered a charge. She shared her class verse—Ephesians 2:10—reminding honorees that all patients are made in God’s image.

“’Walk Worthy’ was a chapel theme when I was here,” she said. “We can do that in such a special way as nurses with people who are…in need.”

The Honor Society of Nursing is patterned after Sigma Theta Tau International, founded in 1922 by six nurses at what is now Indiana University School of Nursing. The mission of the honor society is to advance world health and celebrate nursing excellence in scholarship, leadership and service. 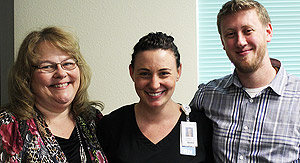 Brown, Donaghe, Kitchens, and Curato attended this year’s induction. All are working as nurses in Redding—Brown as a floor nurse at Vibra Hospital of Northern California; Donaghe in oncology at Mercy Medical in Redding; Kitchens in emergency at Shasta Regional; and Curato as a charge nurse at BloodSource.