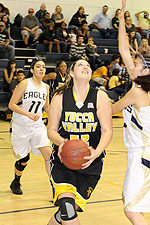 Rodriguez is a junior post who is transferring from Eastern Oregon University in La Grande, Ore. She played four years of varsity basketball at Yucca Valley High School, where she received first team De Anza League and San Bernardino County all-star honors. She plans to major in biology while at Simpson.

“Whitney brings experience and maturity to our team,” said head women’s basketball coach Derrick Pringle Jr. “She is a very skilled post player that we look to step in and help us right away.”

Smalley is a junior guard who is transferring from Southwestern College in Chula Vista , where she averaged 13.3 points, four rebounds, 3.88 assists, and 1.96 steals per game. She attended Eastlake High School and received first team all-league and all-conference and MVP honors. She plans to major in psychology while at Simpson.

“Taylor is a quick and aggressive guard,” said Pringle. “She is a great defender and solid rebounding guard. We expect Taylor to have two great years while at Simpson.”