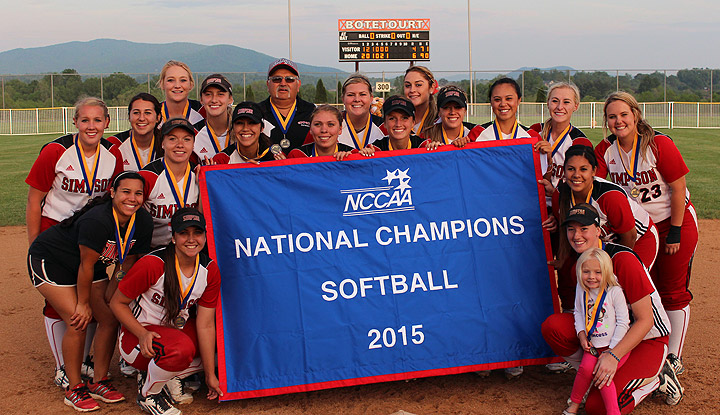 REDDING, Calif. - After being forced into a game two, winner-take-all championship game at the 2015 National Christian College Athletic Association (NCCAA) Softball World Series, the No. 2 Simpson University softball team came from behind to defeat the No. 4 Oklahoma Christian University Eagles by a score of 6-4 to win the first national title in Simpson's softball program history.

In the first game of the championship series, both pitchers, Paris Hallums for the Red Hawks and Madison Nordyke for the Eagles, kept the score at 0-0 through the first two innings. The first breakthrough came from Oklahoma Christian in the bottom of the third inning when Niki Davidson hit a two-out, solo home run to give the Eagles a 1-0 lead.

The Red Hawks tied the game at 1-1 in the top of the fourth when Courtney Thomas reached home after Rachel Esse was hit by a pitch with the bases loaded. Simpson took the 2-1 lead later in the inning when Darby Sanchez, who was pinch-running for Jessica Dager, scored off Amanda Laughlin’s RBI single.

The Eagles took back the lead (3-2) in the bottom of the fifth inning when Monique Elliott and Kendra Pierce scored off Davidson’s RBI double to left-center. Oklahoma Christian took a 4-2 lead in the bottom of the sixth when Sheridan Bond reached home on a Kelsie Finch RBI single to center field. The Red Hawks were unable to score in the top of the seventh and lost 4-2, setting up a sudden-death championship game.

In the final game of the NCCAA Softball World Series, Hallums again pitched for the Red Hawks. She got off to a rough start as the second batter of the game, Courtney Starr, hit a solo homer to give the Eagles an early 1-0 lead. The Red Hawks wasted no time taking a 2-1 lead in the bottom of the inning when Anjelica Cisneros’ left-field single scored Aleisha Brown and Kaylana Mah.

The Eagles scored two runs in the top of the second inning off Jordan Chism's two-run home run to take a 3-2 lead. They scored again in the top of the third inning when Haley Squier hit an RBI single to make it 4-2 Eagles. In the bottom of the third, the Red Hawks brought the score back within one (3-2) when Dager scored on a wild pitch.

In the fifth inning, the Red Hawks took a 5-4 lead and never looked back. Mah got the inning off to a good start by homering to left-center field before Cisneros singled up the middle to score Missy Silveira to take the lead.

In the sixth inning, the Red Hawks added an insurance run when Brown scored off a Mah RBI double. With the Eagles unable to answer in the top of the seventh, the Red Hawks secured their first national title in program history.

Hallums was the winning pitcher and earned her fourth win of the tournament. She pitched seven innings, giving up four runs on seven hits and striking out three batters.

Mah had an impressive game, going 3-for-4 with two RBIs and scoring two runs. Cisneros went 3-for-3 with three RBIs.

"The feeling of winning the championship was unbelievable," said head coach Wayne Stower. "We went through some difficult things as a team -- but they came out stronger on the backside. It's been a lot of fun to coach them."

Mah, Cisneros, Brown, and Hallums were all named to the all-tournament team. Hallums was named Most Outstanding Player of the tournament.

"I feel so honored to be named into the NCCAA all- tournament team," Hallums said. "We work so hard every day at practice and weights and bullpens, so to see all your hard work pay off is a really amazing feeling. Being named the tournament’s Most Outstanding Player was also such an honor. It still doesn’t feel real, but I am honored to say the least."

Photo by the NCCAA