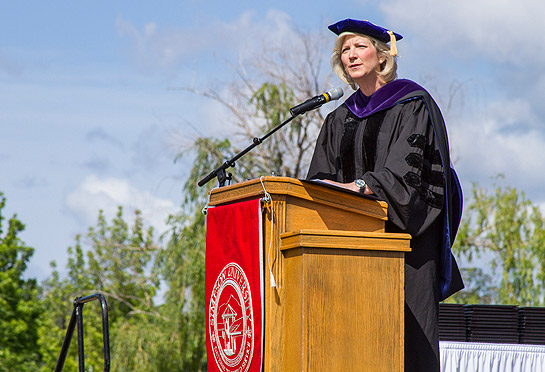 REDDING, Calif. - Simpson University honored 224 graduates during a spring commencement that featured the president of the Council for Christian Colleges and Universities as keynote speaker.

Dr. Shirley Hoogstra started in September 2014 as head of the Washington, D.C.-based CCCU, which has more than 180 member institutions worldwide.

“This is my first graduation speech,” she said, prompting cheers and applause from the hundreds of attendees at the April 25 ceremony. “And perhaps we have something in common, grads. And that is the starting of something new. So I’m going to share with you a couple lessons that I’ve learned about that.”

She shared experiences from the past seven months of learning to risk more, trust more, and worry less, noting that being out of her comfort zone and not in control brought her closer to Jesus, and that change builds trust.

“You will never be disappointed relying on Jesus,” she said. “Being in a place of vulnerability was scary and, I want to tell you, exhilarating,” she said. 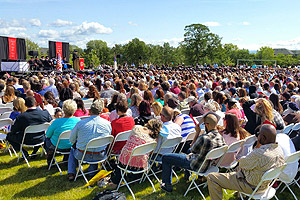 The class of 2015 included 156 traditional undergraduates—the largest graduating class since at least 2006—as well as graduates from the School of Adult Studies (ASPIRE degree-completion), School of Education, and A.W. Tozer Theological Seminary.

A few of the graduates are highlighted below:

Amy Haley, 22, of Cottonwood, Calif., and Elena Kurian, 21, of Jefferson, Ore., made history as Simpson University’s first Spanish double majors. A Spanish Language and Culture degree is the newest traditional undergraduate program, designed to enhance job prospects for students wishing to add it as a second major.

Haley, who also majored in English, is looking into graduate school and interested in teaching English as a Second Language overseas. Kurian, whose second major was psychology, would like to pursue a graduate degree in public health or nutrition.

“I especially appreciate the way the Spanish program challenged me as an individual and how it has changed the way I understand the world,” Haley said. It has deepened my understanding of who God is and given me a greater humility in recognizing that my language, my culture, and my way of life are not the only right way, or even necessarily the best way, to be in the world.”

Both Haley and Kurian were interviewed by a Record Searchlight newspaper reporter on graduation day for an article and video.

Master of Arts in Education

Mathew Wachtor, 29, moved to Redding from Korea to complete his M.A. in Education and teaching credential through Simpson University’s School of Education.

Wachtor, who was finishing his student teaching the week of commencement, lived in Korea for seven years, where he pursued a graduate degree in Korean studies and began working at an international school there.

“There I rediscovered my passion for learning and teaching and decided to pursue my teaching credential,” he said. Shortly after that, he learned about the teacher credentialing program Simpson’s School of Education offered in Korea and began his studies there.

The Korea program has since closed, but Wachtor wanted to complete his studies with Simpson and made the decision to move to Redding, where he finished both his master’s degree and California teaching credential. He plans to return to Korea to work at an international school as an English teacher and the curriculum director.

“What I loved most about the School of Education was that all of the faculty were committed to ‘transforming teachers to transform students,’” he said. “The Simpson faculty are invested into each of their graduate students and work toward pushing them to be the best teachers in K-12 schools, both in the North State and abroad.”

Home Away from Home 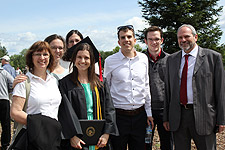 For liberal studies graduate Tabea Frank, commencement was also an occasion to see people she doesn’t get to see often: her parents, Helmut and Judith, who are missionaries in Turkey; and her brother, Simeon, who graduated from Simpson in 2012 and now works for a software company in London.

Tabea, who plans to pursue her teaching credential at the School of Education and would like to teach young children, lived her first year in the residence halls on campus before moving to Gatehouse, a nearby home for college-age missionaries kids.

“I’ve really enjoyed being at Simpson,” she said. “It’s a great community, and I’ve made great friends. I’ve appreciated that people here are willing to pray for you.”

Simeon majored in business and Bible and theology while at Simpson. He enjoyed reconnecting with some of his professors while back on campus.

Three years beyond graduation, he has found his Simpson education impactful in his life and career. “Especially in theology, I have huge respect for the professors. They are also friends,” he said. “And my business professors prepared me for the workplace. It is important to have good people in business.”

After serving in ministry for over 25 years, Gregory Morales decided it was time to change career paths and go in to counseling.

“As a kid I always wanted to help people,” he said. “I have always worked in some way with people, either in customer service or a helping profession. As a pastor I had brief experiences counseling through the years, and it seemed like the perfect transition, not only for work but also fitting to my personality.”

“What I found rewarding is even though it is an online platform, I was able to still connect to the others in my cohort and in the process learn a lot of great stuff,” he said.

Morales plans to find a job in a psychology-related field using the new skills he has learned. He also hopes to attend graduate school and go into a career in counseling and/or therapy.

Spring commencement also included Simpson University’s third class of four-year bachelor of science in nursing graduates. The 35 students were the first nursing graduates to have used the new Science and Nursing Center, which opened in fall 2014.

Simpson traditionally holds graduation twice a year — an indoor ceremony in January for summer and fall grads, and an outdoor event in April for spring graduates.

Simpson University was founded in Seattle, Wash., 1921. During its 25 years in Redding, the Christian university has grown from 200 to more than 1,200 students. In addition to offering 24 four-year bachelor’s degrees in its traditional program, Simpson has also helped nearly 3,500 North State residents complete their degrees through the School of Adult Studies (ASPIRE) program, which offers classes online and on campus.