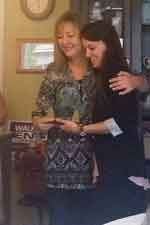 REDDING, Calif. - Simpson University’s student volunteer “strike teams” received the 2015 Community Partner Award from Compass ShiningCare this month for support and collaboration that has gone “above and beyond,” organizers said.

“This is an amazing group,” said Colleen Nelson, coordinator of the Gatekeeper program run by Compass. “Whatever the need is, they’re there, in the community. You name it, they’ve done it.”

Simpson strike teams started in 2012 in response to student desire to help meet community needs year-round. In the past three years, dozens of students have served more than 4,000 hours on more than 150 projects, including cleanup, maintenance, construction, moving and helping at large community events.

Strike teams have helped Compass with setup and staffing at several fundraising events for Compass’s Gatekeeper program, which has trained more than 2,000 Shasta County individuals and 250 businesses and organizations to make referrals of at-risk senior citizens.

“We plug them into programs and services,” Nelson said. “We’re here to make sure we fill gaps with those seniors.”

Nelson shared at the Sept. 16 luncheon about reaching out to the strike teams when she got a call from an older man who needed to get to a doctor. “It turned out he had cancer and needed to get ports put in,” Nelson said. “He had no way to get there, so he was planning not to go.”

Between them, Nelson and Hannah Dewater, Simpson’s coordinator of community services and co-founder of strike teams, figured out a way to get him to the doctor.

“That group has taken on some amazing tasks,” Nelson said.

The award was one of four presented during a special luncheon Sept. 16 at Compass’s facility on Pine Street. The house, built in 1897, is also home to the Grace Place Tea Room.

In September 2014, strike teams were named Volunteer of the Month by KIXE-TV in Redding. Michelle Slade, director of development at the public television station, said strike teams have helped behind the scenes during holiday auctions, making calls and doing data entry, among other tasks. They also volunteered at a KIXE Kids Club party at the Redding Soccer Park.

“We have a really wonderful partnership with the teams,” Slade said.

Dr. Mike Loomis, associate vice president for Student Development at Simpson, said the university—whose motto is “Gateway to World Service”—is honored to receive an award recognizing the work of its students and strike teams.

“Over the last few years, the strike teams have spread out all over this area to meet immediate needs in our community,” he said. “This tangible sign of Christ-love in action has helped numerous people as well as being a tangible life lesson for our students. We are grateful for this award and look forward to continuing a tradition of service to Redding and beyond.”