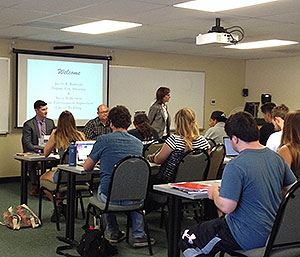 Code Enforcement Supervisor Steve Willkomm, who moved to Redding from Southern California three months ago, and Deputy City Attorney Jacob Baldwin, who earned a degree in business administration from Simpson in 2008, spoke to about 40 students during Dr. Cherry McCabe’s Introduction to Political Science class.

Each year, Simpson University’s History Department sponsors an event in honor of the anniversary of the signing of the Constitution in 1787. Educational institutions that receive federal funding are required to recognize the Constitution during the week of Sept. 17 each year.

“Our speakers shared local government experience and expertise with examples of how the rights, freedoms and government structure which was so carefully laid out in the United States Constitution continue to impact all of us on a day-to-day basis,” said Dr. McCabe, chair of the History Department.

After graduating from Simpson University, Baldwin received his juris doctor from Cal Northern School of Law in 2013. He is a member of the State Bar of California and board member of the Shasta Trinity Counties Bar Association. He works for the Redding City Attorney’s Office, which advises city officials on all legal matters involving the city, including land use, personnel, contracts, elections, redevelopment, and more.

Redding Deputy City Attorney Jacob Baldwin, who graduated from Simpson University in 2008 with a business administration degree, talks to students about what the city attorney’s office does.