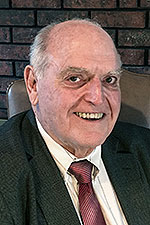 REDDING, Calif. - Simpson University will honor one of its former presidents on Aug. 31 when it unveils the James M. Grant Student Life Center.

Community members are invited to attend the 10:30 a.m. ceremony outside the Heritage Student Life Center, which will be renamed for Dr. Grant, who currently serves as the university’s chancellor.

The ceremony precedes the 15th annual Business Leadership Luncheon at noon, which will feature Dr. Grant as the guest speaker. This event, sponsored by Redding Bank of Commerce, typically sells out each year with several hundred attendees.

Dr. Grant served as Simpson University’s president from 1993-2006. During his tenure, the college experienced significant growth, increasing its student body from 400 to more than 1,100 students, and adding eight permanent buildings to campus.

“The honorific renaming of the former Heritage Student Life Center recognizes the many contributions that Dr. Grant has made to Simpson’s Redding campus,” said university President Robin Dummer. “In 1993 he took a small college that relocated from San Francisco four years previously and established it in the Redding region to become a respected university. Under his leadership the campus grew in size and sophistication increasing its impact on the surrounding community while living out its motto, ‘Gateway to World Service.’"

After retiring from the presidency, Dr. Grant and his wife, Hazel, moved to Carbondale, Ill., where he teaches non-profit management, fundraising and marketing, and grant writing in the Public Administration program at Southern Illinois University; and consults in management and fundraising with emphasis on nonprofits and public organizations. Dr. and Mrs. Grant are also active parents and grandparents with three sons and seven grandchildren.

Those attending the ceremony are encouraged to stay for the Business Luncheon. Tickets for the luncheon should be purchased in advance at simpsonu.edu/businessluncheon.