REDDING, Calif. - Simpson University science students and faculty were among more than 100 “makers” at the first Shasta County Mini Maker Faire at the Redding Civic Auditorium on Nov. 12.

In addition, Simpson University students and staff were among the estimated 100 volunteers helping at the event. Hannah Dewater, university coordinator of community services, organized the volunteer effort at the faire, which included setup the day before.

The Mini Maker Faire is described on its website as “a family-friendly event that celebrates the creativity of individuals, students, educators, innovators, and businesses in the community. Mini Maker Faire allows creators to showcase their work … while the public comes to enjoy interactive experiences … and be inspired.”

The Maker Faire concept was launched in 2006 in the San Francisco Bay Area. In addition to large-scale fairs, more than 120 community-driven, independently organized Mini Maker Faires are being produced around the world.

The Simpson University Science and Mathematics Department was represented with a booth highlighting the biology and biotechnology majors, as well as the original research of Dr. Brian Hooker, associate professor of biology. 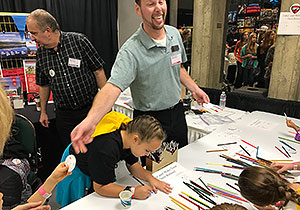 The booth profiled work done by Dr. Hooker and undergraduate students to study the bacterial populations in the soil around the drainage area of Iron Mountain Mine, a Superfund site 9 miles outside Redding that requires constant mitigation efforts to prevent dangerous pollution of the Sacramento River.

Dr. Hooker and his students are attempting to understand what bacteria naturally exist in the surrounding soil, with the potential of being able to propose remediation strategies that would accentuate populations of helpful bacteria.

Visitors to the booth participated in a button-making activity related to the Iron Mountain Mine research project, said biology professor Trent Smith.

Learn more about the event at www.makerfaireshasta.com.

Dr. Trent Smith, associate professor of biology, center, reaches for a button drawing from one of the participants at Simpson University’s science booth at the Shasta County Mini Maker Faire on Nov. 12. The booth highlighted Simpson’s biology and biotechnology majors and original research by Dr. Brian Hooker, left.