Simpson University celebrated the grand opening of its new Veterans Success Center on Nov. 17 with a ceremony highlighted by special music, a flag-raising, and expressions of community support.

“This building is dedicated for one thing: to help veterans get together and be able to have the best chance of succeeding,” guest speaker and retired Marine Lt. Col. Carl Bott said. “Our veterans are successes. They will succeed. The fact that Simpson recognizes them, I appreciate and so much thank you for that.”

About 100 people attended the morning event outside the new center, located in modular building 7 on the west side of campus. Tours of the facility, which includes computer stations and a study room, as well as concessions and a lounge area, followed the ceremony.

The chorale, under the direction of Dr. Cyril Myers, then sang “Armed Forces Salute,” a medley tribute to the five branches of the U.S. military: Air Force, Army, Coast Guard, Marine Corps, and Navy. 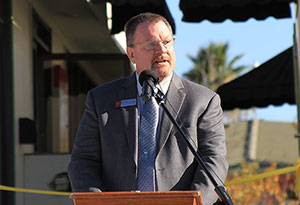 University President Robin Dummer acknowledged the veterans in attendance and shared about his family’s history of military service.

“Given that history, I am especially honored to lead Simpson University in support of veterans through an initiative that provides them the opportunity to achieve their academic goals,” he said. “We join Shasta County and the broader North State in serving our deserving veterans just as they have served our country well.”

He introduced Justin Spears, the university’s first veterans services coordinator. Spears, who served as a Navy hospital corpsman, is completing a master of arts in intellectual leadership at Tozer Seminary and is studying the state of veterans higher education in the U.S. 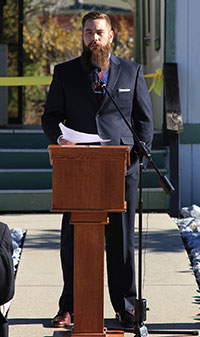 “In renewing Simpson University’s commitment to the Armed Forces veterans community, we’ve undergone some major changes,” Spears said. “It’s my immense privilege to be developing a multifaceted program designed to inspire a successful educational experience for veterans and adequate preparation for meaningful careers.”

In addition to the Veterans Success Center, open weekdays to service members, U.S. military veterans and their guests, the university’s initiative also includes the Success Advocates for Veterans Education (SAVE) team, Spears said. The team comprises 10 on-campus department representatives and four community resources to help with education, health and wellness.

Spears is also working on starting a veterans student club on campus and veterans mentorship programs, among other efforts.

“The center is a one-stop shop to provide access to educational resources and an environment for student veterans to engage with one another,” he said. “It is only a starting point. I look forward to working with service members, veterans, dependents, and everyone in support of veterans education at Simpson.”

“I’ve watched this group come together over the last seven months, and what they’ve done here is remarkable,” he said. 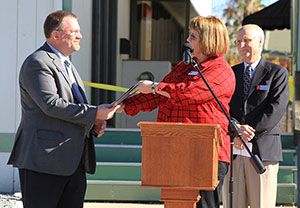 Erin Ryan, a representative from U.S. Congressman Doug LaMalfa’s office, presented a certificate to President Dummer in recognition of the university’s efforts to support veterans.

Johannessen, a longtime veterans advocate, was instrumental in bringing a state-run Veterans Home and the Northern California Veterans Cemetery to Shasta County. An estimated 19,000 veterans live in the county.

Spears cut a yellow ribbon to open tours of the facility, using a Ka-Bar combat knife from a veteran in the audience who served in Afghanistan.

“For all my brothers and sisters that are in the service, this is what this building is about,” Bott said, referencing a quote from William Shakespeare. “For us, this ‘band of brothers,’ it is to help each other and to move forward and to take our place in society as true leaders and heroes.”

Learn more about the Veterans Success Center at simpsonu.edu/veterans.