The veterans comprise the inaugural class of inductees in the university’s newest honor society, a chapter of SALUTE Veterans National Honor Society. They were honored at a special dinner on campus April 20 that included the Beale Air Force Base Color Guard.

In addition, a ceremony April 19 honored four students who were inducted into the university’s chapter of Phi Alpha Theta, a national honor society for history; and 10 new inductees for Alpha Chi, a national college honor society that includes all academic disciplines.

President Robin Dummer and Dr. Gayle Copeland, provost, spoke at both ceremonies, congratulating the students on their hard work and encouraging them to continue on their path of excellence.

“I want to challenge you – enjoy this, but take this induction as a charge to continue in the journey of academic excellence,” Dr. Copeland told the SALUTE members. “You are responsible to God for the gifts he has given, and you will make a difference in your community.”

Cassandra Heath, the university’s VA certifying official, presented the SALUTE inductees; and Dr. Edward Mooney, an education professor who served in the U.S. Army, administered the chapter oath to the veterans, thanking them for their service and dedication.

Phi Alpha Theta has more than 350,000 members and 860 chapters. Simpson University’s History Department received approval for a chapter in 2013. To become a member, undergraduate students must complete a minimum of 12 semester hours in history, achieve at least a 3.1 grade-point average in history and an overall GPA of 3.0 or better. Dr. John Ayabe, associate professor of history, presented the 2017 new members.

Alpha Chi National College Honor Society admission is by invitation only to the top 10 percent of undergraduate juniors and seniors who demonstrate both superior scholarship and character. The 2017 inductees were presented by Rob Simpson, associate professor of outdoor leadership.

The following students were inducted: 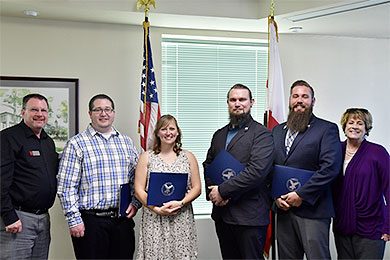 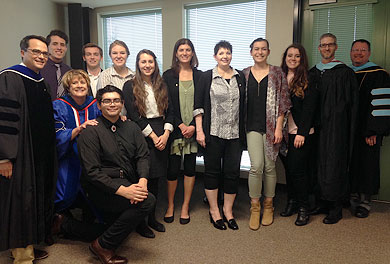