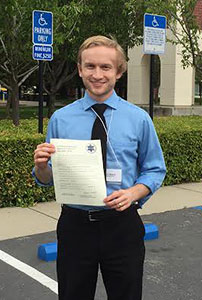 Jordan Magera, a senior from Redding, presented a paper titled “The War on Trade: The Negative Impact of the Continental System and the Embargo of 1807 upon Britain” at the conference held April 21-22 at University of the Pacific in Stockton. The paper won first place in the undergraduate category.

“The Embargo of 1807 and the Continental System on Britain has been claimed by many historians to have a minimal at best impact on Britain,” Magera writes in a description of his paper. “However, by removing the modern day economic lens, which is full of algorithms and complex matrixes, a much more drastic effect on the English economy is observed.”

The conference is an annual event for history students who are members of Phi Alpha Theta, a national honor society for history. Simpson University students have presented at the conference for the past several years, giving talks alongside students from universities such as Chico State, San Jose State, California Polytechnic, and more.

“This event is very rewarding for our students because they are able to see what their peers in other universities are doing,” said Dr. John Ayabe, associate professor of history. “And it demonstrates that even though our program at Simpson is small, our students are just as capable of producing excellent historical research. Jordan is an example of this, and it’s a thrill for me that other historians recognized his scholarship in this way.”

During his time at Simpson, Magera played soccer, served as president of Simpson’s chapter of Phi Alpha Theta, and participated on a WorldSERVE trip to Chile in 2014. He is enrolled in the School of Education’s teacher credential program.

Simpson University showcases student research on campus each year during its Student Research Symposium. Started in 2011 as a faculty initiative, the symposium emulates a professional academic research symposium, where scholars present their work in a formal setting. Learn more at simpsonu.edu/researchsymposium.

Simpson University senior Jordan Magera at University of the Pacific in Stockton, where he won first place for a research paper he presented at the Phi Alpha Theta Northern California Regional Conference in April. / Photo courtesy Dr. John Ayabe