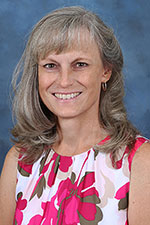 REDDING, Calif. - Longtime Shasta County educator and Simpson University alumna Judy Flores will be sworn in as the 26th Shasta County Superintendent of Schools on July 1.

The Shasta County Board of Education appointed Flores to fill the remainder of the term of Superintendent Tom Armelino during a special open session of the board April 5. She will fill the role until the next election in 2018.

“I am thankful for this opportunity to serve,” Flores said, adding that she is passionate about the Shasta County Office of Education’s mission. “As leaders, we should be continuously learning and improving. The support we offer to schools and our community will ensure Shasta County students receive a quality education that prepares them for high school graduation and success in career and college.”

During her 10 years at the Shasta County Office of Education, Flores has brought in more than $10 million in grants for teacher training in a variety of subject areas that have impacted more than 450 teachers. She has been actively involved in supporting school districts, working with community partners, and advocating at the state level for the needs of small rural districts.

In late March, Flores was honored as Central Office Administrator of the Year in California by the Association of California School Administrators. She has won numerous state and regional awards for her work.

“We look forward to working with Judy Flores to continue the great work already in place and to ensure all students in Shasta County have access to a high quality public education,” Shasta County Board of Education President Rhonda Hull said.

Flores earned a bachelor’s degree in liberal studies from Simpson University in 1985 and received a master’s in administration from Simpson in 1994. She began her educational career as a teacher in the Hayward School District. In 1990, she became a teacher in the Enterprise Elementary School District and assumed various leadership roles in the district office between 1995 and 2007. In 2007, she was hired as assistant superintendent of instructional services with the Shasta County Office of Education.

Flores and her husband, Dan, who teaches music at Boulder Creek School in Redding, have three children.

-information from a Shasta County Office of Education press release