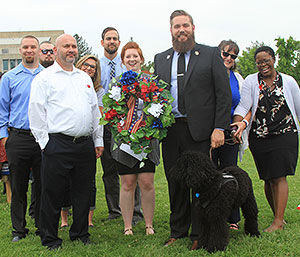 Staff members from Simpson’s Student Development Office joined Spears in placing a wreath at the Veterans Memorial Grave near the Redding Civic Auditorium.

Spears, a Navy veteran who was accompanied by his service dog, Tobiah, delivered an invocation that included a blessing, call to remembrance and moment of silence. 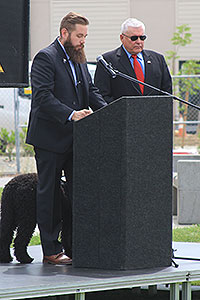 “We join here today in honoring and remembering the sacrifices our brave service men and women have made to protect this nation, bringing freedom and safety to its citizens,” he said. “O Lord, guide us to be more aware of how blessed it is to live in the United States of America. Help us to steward these blessings … May we continue to remember those who have laid down their lives for the safety and security of this great nation and to honor their surviving families.”

Spears, a 2017 graduate of A.W. Tozer Theological Seminary, began overseeing Simpson University’s Veterans Success Center in the fall of 2016. The university dedicated its new Veterans Success Center in November. The center, designed as a one-stop shop for veterans, service members, and their dependents to access educational and career-planning resources, served 31 students who receive veterans benefits during its first full semester.