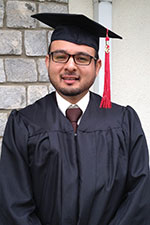 REDDING, Calif. - Orland resident Rafael Ortiz moved to the U.S. from Mexico when he was a teenager. The son of migrant workers, he became the first member of his family to graduate from college on Jan. 21, when he received a bachelor’s degree in organizational leadership from Simpson University’s School of Adult and Graduate Professional Studies, ASPIRE program, during the university’s winter commencement ceremony.

Ortiz, 41, attended Butte College in Oroville, Calif., in 1993, where he earned an associate’s degree in social and behavioral science. He put off furthering his education in order to work.

Ortiz heard about Simpson’s ASPIRE program from a co-worker, and after researching the program and talking to an admissions counselor, he decided it was the right fit.

“It felt like the ASPIRE program was truly designed for someone like me,” he said. “I have a family, and I was already in a leadership role. All I had to do was further my education by attending the program.”

He chose to major in organizational leadership because it would advance his career in logistics, at one of the world’s largest retailers, where he has worked for more than 20 years. While he was still taking classes, he was promoted to an operational manager within the company.

Ortiz started taking ASPIRE courses in the fall of 2014. He was part of a 16-month-long online degree program. He connected with professors and classmates using email, Skype, and Moodle, Simpson’s online learning management system. In addition to organizational leadership, the ASPIRE program offers an online B.A. in psychology.

“I have a full-time job in a leadership role, and I have a family that requires much attention,” he said. “The online program was a perfect fit for my current life and responsibilities.”

Ortiz said one of the things he liked most about the online program was being able to work from home.

“I could tend to my responsibilities as a husband and father without the worry of having to leave my home to attend a classroom,” he said. “All I had to do is go to my computer and complete my assignments. Being able to study in my home gave me an opportunity to feel relaxed and more at ease. If I had a concern, all I had to do was send an email to my teacher. The response was almost instantaneous.”

Based on his positive experience, Ortiz recommends the ASPIRE program to others.

“I always tell people that the program is designed for you to succeed,” he said. “The way it is set up is foolproof, as long as you make a commitment to better yourself. It might be a bit hard at first, but know that the staff, and professors are going to be invested in your success.”

The personal of attention from faculty and staff was one of the things Ortiz found most rewarding.

“All of the faculty and staff were truly amazing in their own way,” he said. “I will never forget them. I felt throughout the whole program that they were not going to let me fail.”

Since completing the ASPIRE program last summer, Ortiz has continued working as an operations manager and is working toward earning his master’s in business management.