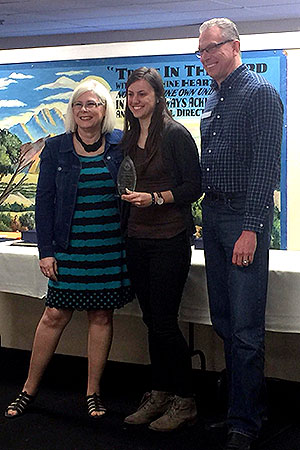 The award was presented during the mission’s annual Volunteer of the Year Awards ceremony on Veda Street. Eighteen awards were given to individuals and organizations that have supported the mission through volunteer efforts. 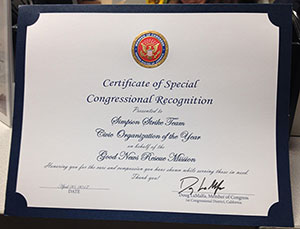 Simpson Strike Teams started in 2012 in response to student desire to help meet community needs year-round. In the past five years, hundreds of students—as well as Simpson faculty and staff—have served more than 8,000 hours on nearly 300 projects, including cleanup, maintenance, construction, moving and helping at large community events. 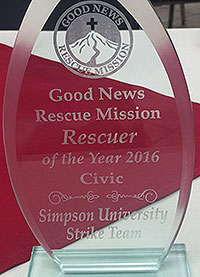 "It is an honor to be recognized by the mission, an organization that is committed to loving every single person that walks through their doors," said Hannah Dewater, coordinator of community services at Simpson. "They exemplify Christ and have been a great partnership with Strike Teams."

Strike Teams has been recognized with a California State Senate certificate of appreciation and Community Partner Award from Compass ShiningCare, as a KIXE-TV Volunteer of the Month, and received a certificate of appreciation from the Great Strides Cystic Fibrosis Foundation in 2015. They were also recognized in 2017 by Northern Valley Catholic Social Service for their ongoing support of NVCSS events.

Photo: Hannah Dewater, center, coordinator of community services at Simpson University, receives the Good News Rescue Mission’s 2017 Civic Organization of the Year award on behalf of Simpson Strike Teams. Standing with her are Janet Shields, the mission's volunteer coordinator, and Robert Cronic, president of the mission's board.