REDDING, Calif.—Simpson University recently honored veterans during a special chapel service and a celebration of its 1-year-old Veterans Success Center, which this fall has served 40 student veterans.

U.S. Army veteran Joel Jensen, who graduated from Simpson with a bachelor’s degree in English in 2017 and is now a graduate student in School of Education, gave a stirring message during a Nov. 17 chapel service that focused on veterans.

He shared his experience of being in the military, where he served four-and-a-half years with the 82nd Airborne Division, including time spent in Afghanistan.

“It was a wild ride – the hardest four years of my life,” he said. “I went to Afghanistan one week after my mom passed away. I saw indescribable things I hope none of you have to see. I got so I couldn’t see God in any of it – I couldn’t reconcile the things I had to do with the love of Jesus Christ.”

It was a rough transition back to civilian life, he said, noting he struggled with addictions. He credits his wife with supporting him and praying for him as he sought help.

Jensen’s first day at Simpson University was also his last official day in the Army.

“I felt very welcome but very different,” he said, recalling sitting alone at a table and being approached by several friendly people.

“This has overwhelmingly been my experience at Simpson University,” he said. “People didn’t know I was having nightmares and suffering from alcoholism and undiagnosed PTSD. But it didn’t matter because something Simpson does well is love. You as a community helped me transition.”

He encouraged the audience—primarily Simpson students, though it also included local veterans and visiting high schoolers—to continue reaching out to the veterans in their midst, especially being willing to listen when a veteran is ready to talk.

“Simpson is called ‘Gateway to World Service,’” Jensen said. “Usually you think of missions work when you hear that, but you as a community are serving your world right here at Simpson by being loving and accepting and willing to listen.”

“I feel a belonging here,” he said. “It’s better here because Jesus is in it. You invite him here. Thank you.”

The chapel service included an honor guard from Beale Air Force Base and the Jefferson Pipe Band, as well as the reciting of the Pledge of Allegiance. In addition to Jensen, speakers included Simpson student Skye Zanardelli, whose grandmother served in the Army; and Cassandra Heath, the associate registrar and certifying official for VA benefits at Simpson.

“Joel walked into my office a surly young man three years ago,” Heath said. “He became a different person… God changes lives at Simpson. Keep loving well and get to know veterans. It takes them a while to open up, but when they do, they share so much.” “They’ve given up a lot so that we can be here,” Heath said.

About 30 veterans attended a complimentary lunch in the Emeriti Dining Center following chapel. Later that afternoon, the Veterans Success Center hosted an open house to commemorate its grand opening in November 2016. The center is designed as a central place for veterans and their dependents to access educational and career-planning resources. Equipped with state-of-the-art technology equipment, the center houses a VA work-study site, the Student Veteran Organization, Simpson’s chapter of the SALUTE Veterans National Honor Society, academic resources, conference and study services, as well as a community space.

Learn more about the Simpson University’s veterans services at simpsonu.edu/vets. 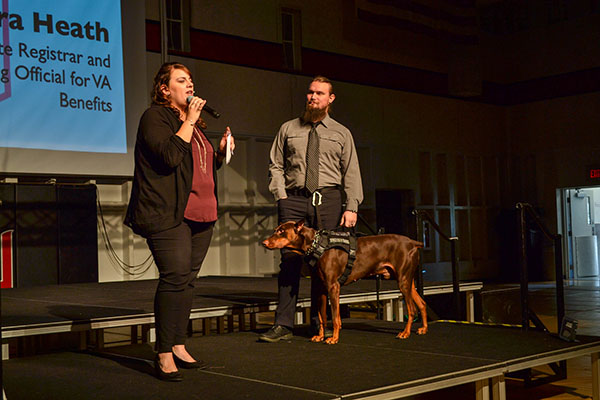