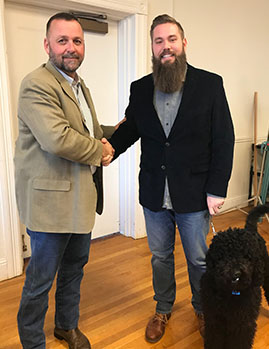 Justin Spears, a Navy veteran and director of Simpson University’s Veterans Success Center, was elected to the council’s board in December.

“The Simpson University Veterans Success Center has demonstrated great resolve and commitment to veterans and the process of transition from the ‘battlefield’ to an education and the next stage of their lives,” Stevenson said. “It is this admirable mission that our organization hopes to better understand as we evolve to be a stronger, more informed partner to those veterans who are being discharged and those now looking to take that next step.”

The SCVAC consists of delegate members representing veterans service organizations in Shasta County. It seeks to help those organizations best coordinate their efforts to serve veterans and their families.

“SVAC’s partnership with Simpson furthers the Veterans Success Center’s mission of being an exemplary advocate of veteran success,” Spears said.

Simpson University opened its Veterans Success Center in November 2016. Serving more than 40 student veterans, the center is designed as a one-stop shop for veterans, service members, and their dependents to access educational and career-planning resources, as well as providing a space for them to study and relax.

During this 2017-18 academic year, the Veterans Success Center has received donations and a visit from the California State Veterans of Foreign Wars commander and team; participated in the 25th annual Shasta Lake Veterans Day Parade; held a Veterans Day chapel service and open house; and partnered with KIXE-TV to host a screening and discussion of the POV documentary “Almost Sunrise.” Simpson University’s Class of 2018 is working on a veterans memorial garden that will be unveiled on campus this spring.