REDDING, Calif.—Why does frozen water float in liquid water? How can sugar, smoking and stress negatively affect our health? Is California’s population of tricolored blackbirds doomed?

Those were just a sample of the questions posed recently during Simpson University’s second evening of “Encounters in Science and Mathematics” that took place Feb. 8 in LaBaume-Rudat Hall.

The lively mix of short lectures and demonstrations was an effort to share a sample of the university’s science offerings with the larger Redding community, according to event organizer Dr. Brian Hooker, chair of Simpson’s science and math department. 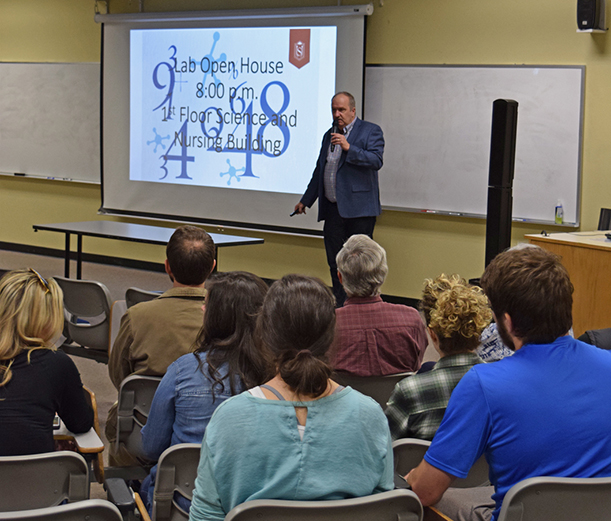 “We want to expose the community to science and mathematics in a Christian context,” Hooker said. The first “encounter” was such fun that Hooker and his fellow faculty members decided to do it again. Members of churches in the region, as well as local high school teachers and students, were invited. “It’s nice to reach out,” Hooker said.

The most recent encounter featured five TED-style talks, starting with Dr. Berkeley Shorthill, who delved into the world of intermolecular forces and how they combine (thanks to hydrogen bonding) to form one-of-a-kind snowflakes.

When the temperature of water dips below 32 degrees, the hydrogen bonds become stable and form rigid hexagonal crystals. In warmer water, Shorthill explained, those bonds are constantly breaking and reforming. That’s why liquid water is denser than ice. As a result, ice cubes float in a glass of water and massive icebergs bob along on the sea’s surface.

Fascinating stuff for a chemist, Shorthill said, while also making it possible “to see the glory of God reflected at the molecular level.”

Professor Megan Grover focused her talk on AGEs, or those pesky advanced glycation end-products that develop when proteins and fats are exposed to sugars. AGEs are aptly named since they can be a factor in aging, and more critically, AGEs can foster or aggravate degenerative diseases like diabetes, atherosclerosis, kidney disease and Alzheimer’s.

Professor Larry Siemens gave a talk on the tricolored blackbird, a once-ubiquitous species in California whose population has decreased by 66 percent in the past six years. Once numbering in the millions, there were an estimated 145,000 tricolored blackbirds in 2015.

Loss of habitat—the bane of many a species—shares some of the blame, Siemens said, but the bigger challenge stems from the fact that tricolored blackbirds are colonial breeders. The instinct to nest and lay eggs only kicks in when the birds are surrounded by thousands of their own kind. Passenger pigeons, also colonial breeders, are now extinct, Siemens said.

Compounding the blackbirds’ woes is their tendency to nest in fields of triticale, a wheat-rye hybrid grown as a high-protein feed for dairy cattle. Triticale is typically harvested about two weeks before tricolored blackbirds are ready to leave their nests, meaning the fledglings fall victim to the threshers.

Dr. David Rice talked about the “muddled” history of homology, a term in biology that refers to similar structures in different species that are, in Darwinian circles at least, believed to be traced back to a shared ancestor.

In his talk on “The Misinformation Age,” Professor Michael Austin also brought up the logic traps and pitfalls that have lurked in communication throughout the years and have flourished with the advent of the Internet.

The cure, he said, is application of the CRAAP test: consider the Currency of the information (is it old? New? Is age important?); is the information Relevant? (does it relate to your topic?); what’s the Authority? (who is the author? What are her/his credentials?); is it Accurate? (is there supporting evidence?); and what is the Purpose of the information? (is it fact, opinion or propaganda?)

Consider the source, trust yourself, use common sense and abide in the Word of God, Austin said, citing John 8:31-32. “With all the information we have, religion is more important than ever,” he said.

-Article and photos by Jon Lewis

Photo: Dr. Brian Hooker welcomes the audience to the second “Encounters in Science and Mathematics” event at Simpson University on Feb. 8.

Video: Dr. Berkeley Shorthill gives a hydrogen gas demonstration during a lab demonstration at the “Encounters in Science and Mathematics” event at Simpson University on Feb. 8.